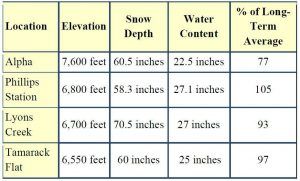 The Department of Water Resources (DWR) conducted its third Sierra Nevada snowpack survey and found the statewide average is 83% of normal.  At the Phillips Station near Tahoe, the team measured 58.3 inches deep with a water content of 27.1 inches.  “Clearly a decline from last month’s really good start,” concedes Frank Gehrke chief of the California Cooperative Snow Surveys Program, who adds, “When you only have one basically storm event in February, this is how you end up.”

Electronic monitoring showed December and January at 170 percent of average.  However, the DWR reports October, November and February rainfall was far below normal.  The northern Sierra sits at 23.1 inches of water, which is 89 percent of normal.  The central Sierra is 21.7 (85%) and the southern Sierra is 17 inches (75%).  Even with the National Weather Service predicting wet weather in the region this week, DWR spokesperson Doug Carlson says the bottom line, “Everyone should continue to conserve water.  There has been no marker that we have passed on the road to the future that says the drought is over, we can start using water again.  In fact, indications are we are below normal on snowpack and just average on precipitation so far this year.  Everyone should conserve water until further notice and that notice may be a long ways into the future.”