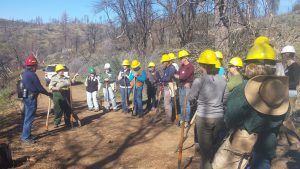 As of Wednesday, over 11,000 ponderosa and incense-cedar pine seedlings have been tucked into already prepped planting areas within the Rim Fire burn scar. Clare Long, the STF partnership and volunteer coordinator for the Rim Fire Recovery effort shares, “We started at the beginning of February with some light planting but we are ramping up…because the time to plant trees is in February and March, because the soil is moist and and there are good temperatures to do it.”

Although the work efforts are trending well ahead of the initially projected 50 to 100 plantings per person per day estimates, the goal is to get 122,000 trees in the round before the end of March, as weather permits. Long admits, “We could use more help…we are planting them near Groveland area, there are some areas near Buck Meadows…a little out on Evergreen Road…some areas right near the Camp Tawonga area – these were some of the areas that were relatively easy to get folks into – these are some areas that we want to be able to get some trees into very quickly.”

Volunteers Pitching In From Near And Far

As the project steams ahead, the Tuolumne River Trust, one of the project partners, is reaching out to able-bodied volunteers of all ages, near and far. Long says she is amazed and gratified by the interest. The planting commenced with what she describes as an “amazing” effort by a special interest group from the Arctic Circle called World Renew that brought a team down for a week, planting at a pace of about 1,500 seedlings per day.

Scouting, church groups and other special interest groups along with families and solo sign-ups are among those slated to lend a hand in the coming weeks. Some plan to camp or stay at local inns; others are day-trippers or locals. Along with STF personnel and project partners providing a backbone, members from Americorps, including National Civilian Conservation Corps members are helping muscle the efforts.

The long-term plan, according to Long, is to conduct plantings by volunteers around this time for the next five to seven years; each time getting about 130,000 trees into the ground. The balance of the overall planting, which is some 7.5 million trees, will be accomplished with the help of contractors, she says. The National Forest Foundation and Arbor Day Foundation are picking up the actual cost of the trees at roughly 37 cents per seedling. These, as Long explains, come from a Placerville nursery that collects seed cones every September at various elevations, and subsequently germinates different species to STF’s order. Seedlings currently being planted are ponderosa pines and incense cedars appropriate for 3,500 to 4,500 foot elevations. (To view images of the efforts, click in the upper left image box.)

Those intrigued with helping reforest the Rim Fire area are most welcome to roll up their sleeves and grab a shovel, Long says. However, she warns, “You can’t just show up, you have to sign up beforehand [with Tuolumne River Trust]…we have to know.” There are only a few other caveats, she cracks, “Kids from seven to 700 are welcome — anybody under seven, we want to make sure that there is an adult per kid under seven – anybody over 700, we want your doctor there.”

After signing up in advance with Tuolumne River Trust, participating individuals, families and groups meet at the Groveland Ranger station on the set day(s) at 8 a.m., dressed appropriately for the weather, with lunches, snacks, water and gloves in tow. For those wondering just what they are getting into, Long provides the following assurances: plenty of instructors are on hand to show newcomers the ropes and answer questions; porta potties and hand washing stations are also onsite for comfort and convenience. She adds that workdays generally run from 8 a.m. until 2 p.m. with a break for lunch; days end with a “thank you” ceremony.

To contact Tuolumne River Trust about volunteering, fill out the online form available by clicking here.