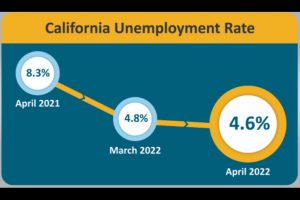 California employers added 41,400 new jobs in April, dropping the state’s unemployment rate from 4.8% in March to 4.6% in April, according to the Employment Development Department’s (EDD) latest jobless report.  That is the lowest it’s been since the pandemic, following 14 consecutive months of growth. The state has regained more than 91% of the 2.7 million jobs lost in March and April 2020, back at the pandemic’s start.

“California continues to lead the nation’s economic recovery, getting more people back to work and off the unemployment rolls than the rest of the country,” touted Governor Gavin Newsom, adding, “But we know more work is needed to bolster the economy and help offset higher costs that families are dealing with right now—California’s record $97.5 billion surplus is going right back into Californians’ pockets and addressing our state’s most existential challenges, fostering growth and opportunity for all,”

The Mother Lode followed the state’s downward trend; Tuolumne County dropped from 4.7 in March to 4% in April, leaving 790 unemployed out of a workforce of 19,840. Calaveras went from 3.5% to 3%, respectively. Out of a labor force of 21,590, that leaves 650 without a job. Santa Clara and Marin counties had the lowest unemployment rates in the state at 2.1%, while rural Imperial County along the U.S.-Mexico border had the highest unemployment rate at 11.7%.

Statewide, eight of California’s industry sectors added new jobs last month, with the most significant gain in the leisure and hospitality sector at 20,100 jobs added. The construction sector reported the largest loss of 13,200 jobs last month, attributed to more rain in April.

California accounts for about 11% of the U.S. labor force. The nation’s jobless rate remained steady at 3.6% in April.