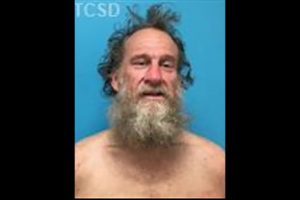 Columbia, CA – In the Columbia area a man was found bloody and lying in a roadway, according to the Tuolumne County Sheriff’s Office.

On Thursday morning, deputies rushed to the 12000 block of Yankee Hill Road in Columbia after a caller reported a bloodied male lying in the roadway and another man standing over him with a knife. Once on the scene, deputies discovered the 59-year-old male victim lying in the street, covered in blood. His alleged attacker, 53-year-old Brent Michael Snyder from Columbia, was also contacted and was wearing only a pair of underwear. Deputies attempted to arrest Snyder, who they say put up a struggle but was quickly subdued and handcuffed.

During questioning, deputies learned that Snyder reportedly began yelling at the victim and grabbed a cutting board and a knife. He allegedly struck the victim in the face with the board. The victim then fell to the ground, and Snyder jumped on top of him. Sheriff’s officials detailed, “Snyder reportedly made statements about wanting to kill the victim and tried to stab him with the knife. A bystander yelled at Snyder that he was calling law enforcement. The victim was able to avoid being stabbed and crawl away.”

Snyder was arrested for felony assault with a deadly weapon and criminal threats. His bond was set at $40,000. The victim was transported via ambulance to the local hospital and treated for his injuries, which were not disclosed.