The Source of Jamestown’s Morning Traffic Delay Is Discovered 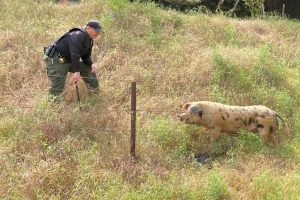 CHP and animal control working to capture the runaway pig

Jamestown, CA – Those traveling along Highway 49/108 in Jamestown this morning saw plenty of first responder activity that slowed traffic.

The CHP has revealed the reason for those motorists’ delays near the area of Woods Way. It was not a collision or a disabled vehicle, but a 300-pound escape artist. The image box picture shows an officer trying to get a spotted pig to give itself up, but he continued to resist being captured.

CHP officials jokingly noted, “Apparently, it [the pig] didn’t agree with where the rancher was taking it.”

However, the pig’s owner may not be surprised by the swine’s efforts to escape since it is named Houdini.