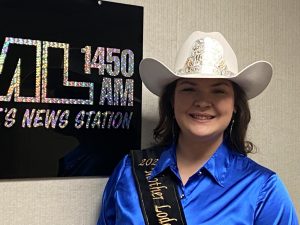 Shortly before Rumsey was announced as the winner, various awards were handed out to all four of the candidates.

Macy Anne Liotta won the Written Test Award and was named as the first Runner Up.

In addition to being crowned as Queen, Rumsey was recognized for horsemanship (50% of the total), High Ticket Sales, Appearance and Personality.

Rumsey said, “The reality of winning hasn’t even kicked in yet. It may not until I hear the first announcer say my name during the Round-Up Parade on Saturday morning.”

Twenty year old Rumsey was born and raised and continues to live in Sonora. She attends both Columbia College and Modesto Junior College, where she is working towards an Animal Science Degree.

In addition to her parents, Rumsey has several horses (her favorite is a chestnut, chocolatey-brown male named “Tucker”), an older brother and two younger sisters.

If her name sounds familiar, Rumsey was named as the Junior Round-Up Queen in 2017 during the short-lived “Junior Queen” competition.

Looking ahead Rumsey says, “It is going to be a busy week, I don’t know what my favorite part is going to be, but I’m definitely looking forward to the parade and rodeo. There is nothing like the Grand Entry at the beginning of the Rodeo.”

Rumsey wrapped up the interview by saying how much she appreciates all of the Posse members for working very hard to make the Round-Up happen this year.

A list of events can be found in the myMotherLode.com Roundup section. Just type ’roundup’ in the keyword box.