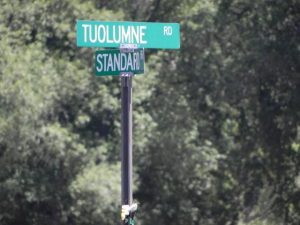 Sonora, CA – Move forward plans for a long-in-the-works road improvement project to include traffic signals at Tuolumne and Standard roads are rolling after a 4-1 vote by the Tuolumne County supervisors.

Consideration of approving plans, specifications and the bid book for the planned improvements at the two roads was among the agenda items that the board tackled on Tuesday. Through the eventually approved resolution, it also determined that, as the project is part of the county’s 2012-2016 Capital Improvement Plan, it is statutorily exempt from the California Environmental Quality Act (CEQA).

Plans call for the widening of the two roads; left-turn and dedicated right-turn lanes; a concrete sidewalk, among other pedestrian improvements; striping and signage; and drainage improvements to include a culvert under Standard Road. Back in August, $50,000 in additionally allocated funds made available from the Tuolumne County Transportation Agency (TCTA) were earmarked for construction of a bus shelter at the location.

While no one from the general public made comment, two supervisors spoke at length about “bigger picture” solutions for the location. District 5 Supervisor Karl Rodefer commented that he was probably opening “a can of worms” by pointing out that that those roads, as part of an already busy corridor will only become more active over time, and that in its current state it can be hazardous for bike and foot traffic. He noted that signal lights and other improvements outlined in the project should be constructed with an eye towards future infrastructure needs that should allow for a four-lane road — one lane each for two-way traffic as well as a common middle lane for turns and a half-lane on each shoulder to safely accommodate those using alternative transportation, like bicycles.

District 3 Supervisor Evan Royce, who wound up casting the only dissenting vote, questioned the relevance of the current project plan. His argument was, while it has remained on the county’s long-standing list of traffic improvements, other improvement alternatives might render traffic lights at that crossroads unnecessary.

The overall project, funded at  over $1.2 million, is among the county’s Road Fund Capital Project budget line items and will be largely paid for by traffic mitigation fees paid by Black Oak Casino Resort and the Tuolumne Band of Me-Wuk Indians that channel into the county’s Tribal Road Mitigation Fund.

Project bids are now due by Nov. 19. Slated for timely staff review and negotiation, current expectations are for the supervisors to give their contract approval by Dec. 15.