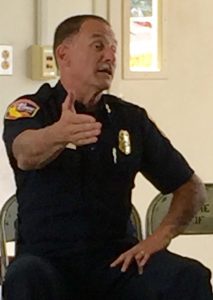 Wednesday, Natural Resources and Environment Under Secretary Robert Bonnie, California Natural Resources Secretary John Laird and Cal Fire Director Ken Pimlott joined other state officials to get a firsthand view while discussing the early stages of the recovery work now going on in the wake of the Sept. 9 wildfire that ravaged nearly 71,000 acres; also addressing current wildfire behavior, fuel conditions and fire costs in this fourth year of drought. Other topics covered, as the tour wound its way from Sutter Creek through Mokelumne Hill to San Andreas, included pre-suppression and ecological restoration strategies, versus suppression; watershed protection; and increasing concerns over tree mortality issues from drought-related insect and disease impacts.

Clarke Broadcasting caught up with the group at the Cal Fire Tuolumne Calaveras Unit Headquarters in San Andreas, where the tour participants ended the day swapping thoughts on current fire plans in place and cohesive strategies, moving forward.

Following the meeting, Cal Fire Director Pimlott shared that, among the lessons learned from the violent spread rates of the devastating Butte and Valley Fires due to the extreme tinder-dry drought conditions, is that educating the public about evacuating early is key. (Click here for video comment.)

Pimlott notes (click here for video comment), “Personal anecdotes from individuals who survived or experienced this fire, those are always the best. [People] hear the fire service…me, Chief [Josh] White…talking about this all the time, but there have been some real compelling stories from the survivors of this…from individuals, who lost their homes, who said they will never ever stay and try to protect their home…they did not realize how intense the fire is — so listening to them talk to their fellow residents about that [really sends the message] to leave early.”

Another lesson, Pimlott says, is in looking at what allowed some homes to endure the disastrous blaze that devastated well over 800 buildings; 475 of them residences. “The building construction…defensible space…landscaping…there are some very clear examples out there as to why homes survived, because of the greenscape…the maintenance and the vegetation, and we want to replicate that — and use those as really positive examples of what everybody should do,” he states.

Getting back to simple survival of a wildfire such as the Butte Fire,  Pimlott says, “Have your plan — do not wait. Much of the effort in…the first hours…certainly in the Butte Fire…was just going house-to-house and evacuating residents — and much effort was directed towards that because we are always going to protect life first — but while that was going on, we were not able to focus on the perimeter control because our firefighters were diverted so they could save lives…we lost two lives but that could have been much greater.”

Pimlott calls the recent Butte and Valley Fires a wake up call for everyone. “Fires are not burning the way they have historically burned — they are burning much more quickly, much more erratically, and people need to take heed to that…right now,” he points out. Too, he warns, “Fire season is not over — even though the days are getting shorter and we are in the fall, conditions are still very ripe out there for large damaging fires.”

As for personnel on scene, ahead of the start of what rains the region might get, Pimlott reports that, for the next six to eight weeks, recovery personnel will continue to work on life safety issues while continuing to address impacts to the watershed. He refers to the multi-agency, multi-disciplinary teams that are in place daily. Along with Cal Fire, Caltans and the utility companies are busily at work, clearing debris along their right-of-way areas, he notes. “It is really a unified effort,” he states, also giving a shout out to CalRecycle, which is now addressing debris clean up and removal on individual parcels as FEMA continues working to determine ways how various restoration efforts might be funded.

Analyzing the burn severity within the Butte Fire footprint and impacted watersheds are helping determine where the impacts will be for erosion and potential landslides, as wet weather preparations are being made in the weeks ahead (click here for video comment), according to Pimlott. Where recovery teams can mitigate, they will, he says, using hand crews and other means to remove debris from culverts and streams. He adds there will be plenty of warnings and patrols in place, identifying these areas, should there be significant rainfall, so folks can take heed if there is flooding.