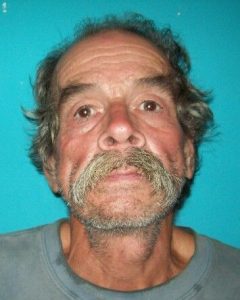 Jamestown, CA – Arrested near Rocca Park this week was a man after threatening actions to passersby and making criminal threats against a local business owner.

It was Tuesday morning around 10:40, according to Tuolumne County Sheriff’s Department spokesperson Sgt. Deborah Moss, when a deputy making a patrol in downtown Jamestown was flagged down by pedestrians who complained about a threatening public disturbance. While speaking to them, the deputy said he heard 61-year-old Roy Hartley Hurlbert of Jamestown yelling profanities and making derogatory statements while walking from across the street towards Rocca Park.

Moss recounts that, once in the park, Hurlbert confronted another person and began to chase him while spewing more profanities. At that point, she says the deputy immediately made contact with and detained Hurlbert, noting that the subject emanated a strong odor of alcohol and his eyes were bloodshot.

“The deputy continued the investigation and…learned that Hurlbert had threatened a business owner by threatening to burn her business down and this confrontation had happened after the business owner had confronted Hurlbert about his aggressive behavior toward the pedestrians in Jamestown,” Moss states. So, she adds, “Hulbert was arrested for the criminal threats…and for being intoxicated in public to the point where he could not take care of himself.”

Moss reports that Hurlbert was verbally aggressive and continued hurling further insults at the deputy while being transported to the Tuolumne County Jail and additionally notes that, as he is currently on parole from the California Dept. of Corrections, his arrest and aggressive behavior was reported to CDC regarding possible parole violations. He remains in the county jail pending a court hearing.