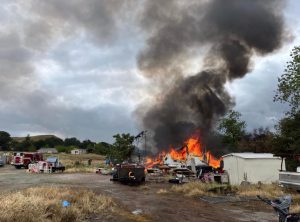 A home located in Burson off of Parsons Road was fully engulfed in flames when the firefighters arrived at around 2pm yesterday afternoon.

The Calaveras Consolidated Fire Department reports that sadly the family lost their pet dog in the fire, so firefighters later buried it near the home site. A man at the home also received minor burns on his forehead. He was treated at the scene and released. The Red Cross is assisting all of the displaced residents.

After the flames were knocked down, and mop-up was underway, a tornado warning was issued. The first responders took cover in their apparatus until the storm system passed through.

The cause of the fire is still under investigation. Other agencies that responded included CAL Fire, Clements Fire and Mokelumne Hill Fire.