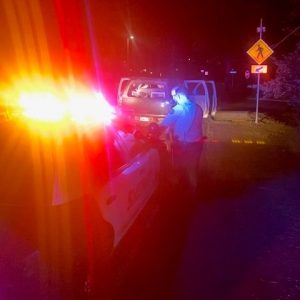 Jamestown, CA — Making a traffic stop on an SUV near Seco Street in Jamestown Wednesday night around 11:46 p.m., a Tuolumne Sheriff’s Deputy spotted a handgun in the vehicle.

The deputy then called for backup, and when those forces arrived, they remained at a distance with guns drawn. The occupants were ordered out of the SUV, including the driver, 43-year-old Thomas Galano, and his passenger, 44-year-old Shelley Wade, both of Stockton. A record check found both were convicted felons and both had outstanding misdemeanor warrants.

A search of the vehicle turned up a loaded Sig Saur handgun, which was later determined to have been reported lost out of San Joaquin County. Pepper spray, a pellet pistol, a bag containing just under 80 grams of methamphetamine packaged into several smaller bags, checks, and a scale were also found.

Through statements made by Wade, deputies determined the firearm was hers, which, being a felon, she was not allowed to own. The pepper spray also belonged to her. She was arrested for having those items, along with drug possession and sale. Galano was also cuffed on drug-related charges, and both were arrested for drug possession and sales. Each was placed on $30,000 bail.