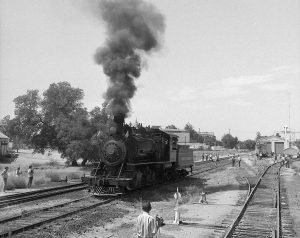 Sierra No. 34 was donated by railroad enthusiasts Chris Baldo and Marion Hatch.

A special ceremony in recognition was held during last Saturday’s opening weekend festivities at the park. No. 34 was built by the Baldwin Locomotive Works of Philadelphia in 1925 for use by the local Sierra Railway. The California State Railroad Museum Foundation reports that the 2-8-2 Mikado locomotive is the only surviving Sierra locomotive that has never been in service on another railroad. The 87-ton train also starred in the 1976 film “Bound For Glory” (as Santa Fe 1496).

It last operated in 1980 and actually has been housed at Railtown over the past 40 years. Officials are now looking to restore the train and put it back into operation.

Tim Schroepfer, President and CEO of the California State Railroad Museum Foundation, says, “We are incredibly grateful to Mr. Baldo and Mr. Hatch in helping the Foundation acquire this locomotive. The Foundation is thrilled that this historic locomotive will be preserved at Railtown 1897 in perpetuity, and we look forward to the day it will once again run on this historic railroad for the enjoyment of families and rail enthusiasts for generations to come.”

Other locomotives currently in operation at Railtown include Sierra No. 3 and Sierra No. 28.