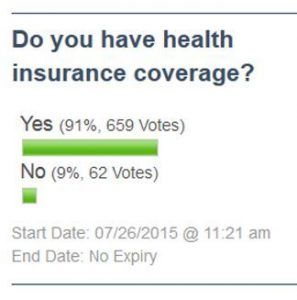 In a recent informal myMotherLode poll the question “Do you have health insurance coverage?” was asked. The results of the three day poll; 91 percent of the 721 votes were Yes, and 9 percent No. In related news California released new Covered California health plans will increase by up to four percent next year.

The most recent, 2013 Current Population Survey from the Census Bureau shows that the percentage of people with health insurance for all or part of 2013 was 86.6 percent, and 13.4 percent did not have health insurance for the entire year; this amounted to 42.0 million people.