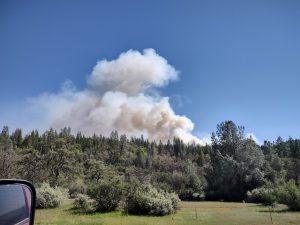 Groveland, CA — A fire that ignited near Smith Peak Outlook Road outside of Groveland is now 100-percent contained.

It was initially estimated to be around 10 acres when first located Sunday afternoon, and the final acreage, according to Forest Service Spokesperson Benjamin Cossel, was 67-acres. Full containment was reached at around 9:20pm.

Smoke is still visible in the area this Monday morning.

Cossel adds, “We have handlines around the entire perimeter and will have one dozer, two water tenders, two engines and one hand crew back in the area today for mop-up operations.”

The cause of the fire is still under investigation.

A special thanks to community news partner Brenda Crouse for sending in photos of the fire taken yesterday near the Big Creek Meadow area. News photos can be emailed to news@clarkebroadcasting.com. Click on the image box to also see a photo of the lingering smoke this morning.