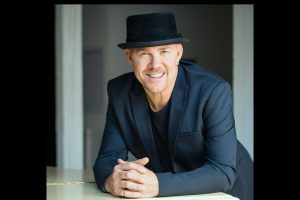 Schroeder was Wednesday’s KVML “Newsmaker of the Day”.

After a five-year hiatus, Todd Schroeder will return to his hometown high school, to entertain and perform with several of his famous and musically talented friends on Saturday April 30th.

The concert will raise money for annual grants given to Sonora High School graduates, who are wanting to pursue a career in the performing and visual arts.

The Todd Schroeder’s Young Artist Grant (YAG) was started in 1995 for selected students at Sonora High School in Sonora. Since its inception, over 50 grants have been awarded. The main fundraiser for this grant is this benefit concert which features Schroder at the piano along with his live band and individual performances by well-loved celebrities.

More About This Year’s Performers:

Todd Schroeder is an award-winning pianist, composer, vocal performance coach and certainly one of the hardest-working music directors in the world with the prestigious L.A. Stage Alliance awarding him their Ovation Award for “Best Musical Direction” and BroadwayWorld.com named him their “Musical Director of the Year”.

Jason Alexander – Best known for his role as George Costanza in the television series Seinfeld, for which he was nominated for seven consecutive Primetime Emmy Awards and four Golden Globe Awards, Jason has also appeared in several Broadway musicals, winning the Tony Award for Best Leading Actor in a Musical for “Jerome Robbin’s Broadway”. Local residents may remember that Alexander was also a special guest during the 10th Anniversary concert.

Sam Harris became a household name as the Grand Champion of Star Search in its premier season. Since then, Sam has become a multi-million album selling recording artist with nine studio albums to his credit. His has appeared in no fewer than five Broadway musicals, and is also an author, penning two books including a collection of autobiographical essays and stories entitled Ham – Slices of a Life. That book was adapted into a stage musical and then a movie, HAM: A Musical Memoir.

Jordan Hill is a singer/songwriter originally signed by producer David Foster. Her first hit song, “Remember Me This Way”, became the theme song for the film “Casper”. She continues to perform around the world and has worked with such artists as Jim Brickman, Barry Gibb, and Billy Porter.

Kevin Fisher is a multi-platinum selling songwriter and music producer. Rascal Flatts, Sara Evans, Uncle Kracker, and many others have recorded his songs. As an artist himself, and writer for others, Kevin’s songs can be heard on radio, streaming services and in concerts all over the world.

Carrie Schroeder is best known for playing Dr. Sigourney Gaines on Nickelodeon’s hit show, ‘I Am Frankie’, now streaming on Paramount+. Carrie recently appeared on season 2 of “Why Women Kill” and on FX’s “Snowfall.” She can also be seen starring alongside Eric Roberts in the sequel of the Lifetime Movie series “Stalked by my Doctor,” and in the Hallmark film “Save the Wedding.” Before moving from Australia to Los Angeles in 2012, Carrie appeared in the long-running hit Australian television shows “Neighbours,” “Offspring”, and “H2O, Just Add Water.”

Robyn Spangler – named Broadwayworld.com’s “LA Best Female Cabaret Artist”, Robyn has recorded four albums including “Something Cool: The Billy Barnes Sessions” which was named “One of the best of 2017” by All That Jazz magazine. Her self-penned single, “Second Wind” spent two weeks at #1 on ReverbNation! She is currently recording her fifth studio album, an intimate vocal and piano project with Todd Schroeder.

Wendy Tuttle is a LA based singer/songwriter known for her intimate and haunting voice. She can commonly be heard on demos and commercials including “Barbie”. Her newly released album, “Cocktail Hour” can be found on Spotify, Apple music and all streaming services.

Tickets are available now at eventbrite.com. The tickets are expected to sell fast at just $35 each. The show is reserved seating only.