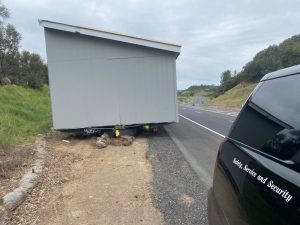 Tuolumne County, CA – A mysterious half-house abandoned on the side of Highway 108 near Yosemite Junction has found a new home.

We reported earlier that half of a manufactured house had been discovered by the Sonora CHP on Thursday, March 17th, with no note or information regarding its owner. At the time, the CHP voiced concerns regarding its removal and the traffic hazards it could create, while also asking the public for help in finding its owner.

Clarke Broadcasting reached out to CHP spokesperson Officer Steve Machado for an update on the home. He relayed that the house had been making its way from Riverside County, which is east of Los Angeles. It was being escorted by CHP units from there when it became disabled.

“The house was being pulled up the hill and they had a mechanical failure on the front cross member. So, they left the house there until they were able to get a repair person to come up and fix the portion that needed to be welded,” explained Machado.

The half-home was removed a couple of days later, with Machado revealing, “On Saturday (March 19) at about 7 a.m., the half-home was picked up and was escorted to the Groveland area by several CHP officers in order to get it to its final destination.”

Machado did not have an exact location in Groveland. He added that there were no further problems while hauling the house to its permanent home.