Whose House Is This? 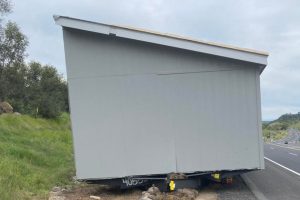 Tuolumne County, CA – The CHP wants to know who left half a house, pictured in the image box, on the shoulder of Highway 108 in Tuolumne County.

“It just showed up in the middle of the day,” responded CHP spokesperson Officer Michael Huddleston when asked for further details by Clarke Broadcasting. Huddleston relayed that a CHP officer first spotted it east of the Yosemite Junction about two days ago. He added, “No note or anything. We didn’t even see the vehicle that was towing it.”

Currently, the CHP has no clues as to the owner of this one side of a manufactured home. Huddleston shared, “We haven’t heard anything as far as who dropped it. It’s in good shape and they might still want it.” He gave this reason for why it might have been left, “It appears to have some damage to the tongue like they might have had issues in towing it. So, they pulled over to safely remove it. It looks like it might have started to buckle near the front of the trailer’s tongue [the part of the trailer that hitches to the tow vehicle].”

The CHP wants to get a hold of the owner to find out their recovery plan and to assist in removing the home. Huddleston detailed, “In order to pull that thing from the shoulder, they’re probably going to be blocking traffic. So, we would like to assist to minimize any traffic problems that might arise from removing that half a house.”