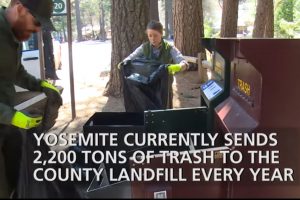 In 2015, the park partnered with Yosemite Conservancy, Yosemite Hospitality, and NatureBridge to create the Zero Landfill Initiative, an effort to divert 80% of park waste to recycling or composting facilities instead of the Mariposa County Landfill. Currently, the park sends 2,200 tons of trash to that landfill and hopes to reduce that amount even further. Visitors play a big role in helping to achieve that goal by being mindful of what they bring to the park, reducing garbage with reusable items, and recycling.

Park officials provided this update on initiative practices being implemented in Yosemite: