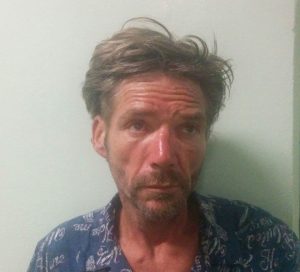 Sonora, CA — A homeless man who told police he set a fire to “warm his food” is now behind bars facing felony charges of reckless starting a fire.

Sonora Police report that Wednesday at 1:13 a.m. on the 300 block of Stockton Road, Officer Brandon Norris spotted a large plume of smoke billowing out of a wooded area on the south side of the roadway. Upon further inspection, the officer saw two-to-three-foot flames shooting out of some brush underneath several trees. Nearby, he found 51-year-old Todd Hunter, a transient, who confessed that he set a fire to warm his food.  When officer questioned him about why he would start a fire under drought conditions, police say he replied that it would not hurt if some of the vegetation burned off anyway.

Also found near the blaze was a shopping cart, which Hunter was arrested for stealing, in addition with starting the fire. Stinson says Hunter has only been in the area for about two weeks but has already had several run-ins with the law. His rap sheet includes armed robbery, grand theft, possession of dangerous weapons, and manufacturing dangerous weapons while in prison, according to police. Additionally, this is not the first fire arrest for Hunter. Just this past March, he served 45 days in jail for causing a fire in Ceres.

Firefighters were called to the scene and able to put the flames out quickly but Sonora Police Chief Mark Stinson says it could have been devastating. As previously reported, the chief is a proponent of a controversial “no camping” ordinance that prohibits camping in areas of the city where public service is limited. That ordinance included a sunset clause that expired last November and the city council did not renew it.  Stinson pushed for the ordinance after a similar fire in July of last year along Highway 108 burned a quarter-acre. Stinson says this is a perfect example of why the ordinance is needed arguing, “We’re very fortunate that Officer Norris noticed the plume of smoke, because this one had even a greater potential of burning down several residences.”