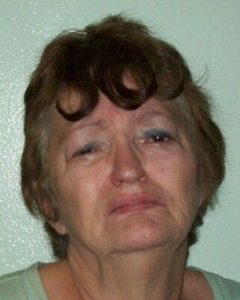 Soulsbyville, CA — An arrest has been made in relation to yesterday’s house fire in Soulsbyville.

60-year-old Catherine Park, who lived at the home at 17260 Timber Drive, with her adult daughter, has been arrested for arson. Sgt. Deborah Moss of the Tuolumne County Sheriff’s Office notes that deputies had actually responded to the home twice yesterday morning because Park had called to report vandalism (broken windows).

The Sheriff’s Office determined that she was responsible for those broken windows. At this time the Sheriff’s Office is not releasing additional details about how or why Park allegedly ignited the house on fire. The home was a complete loss, a vehicle was burned, and other nearby homes were threatened.

It started shortly before 2:30pm.