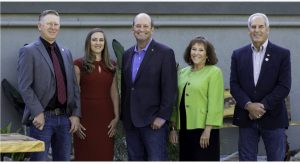 San Andreas, CA — The Calaveras County Board of Supervisors approved a proclamation today in solidarity with the people of Ukraine in response to the attacks from Russia.

It was brought forward by District Three Supervisor Merita Callaway whose grandmother is from Kyiv, and she also has other family members in Ukraine. Callaway noted that it is a very emotional issue and she had difficulty reading the full resolution aloud because of her close connection.

During public comment, a member of the community thanked the board for taking the action and handed them ribbons in support of Ukraine. The county proclamation was approved 5-0, and there was standing room applause immediately afterward.

The full proclamation is below:

WHEREAS, Ukraine has been a sovereign and independent state since August 24, 1991, upon its withdrawal from the collapsing former Soviet Union; and

WHEREAS, Ukraine adopted its constitution in 1996 and is home to 44 million citizens led by a popularly elected president; and

WHEREAS, the United States and Ukraine share common values, including freedom, democracy and the rule of law: and

WHEREAS on February 24, 2022, the Russian Federation launched a brutal, unprovoked, act of war by undertaking a full-scale invasion of Ukraine;  and

WHEREAS, this attack has been condemned throughout the world by international stakeholders; and

WHEREAS, this power grab by the Russian Federation has resulted in the deaths of hundreds of innocent civilians, has destroyed essential infrastructure, violated rights, and poses a threat to democracy; and

WHEREAS the County of Calaveras joins the international community in condemning this violence and honoring those who fight for freedom and an independent Ukraine;

NOW THEREFORE BE IT PROCLAIMED that the Calaveras County Board of Supervisors hereby proclaims its support for and solidarity with the people of Ukraine in their fight for freedom, commends them for their strength and courage, and urges all our citizens to support those fighting for democracy and freedom.