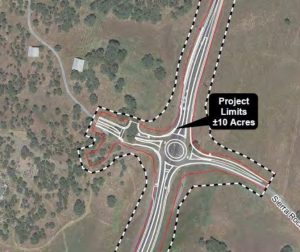 Jamestown, CA — Much is going on, and more is on the horizon, near Chicken Ranch Rancheria in Jamestown.

In the next two to three weeks construction will start on a roundabout on Highway 108 at Mackey Ranch Road. The project is fully funded by the Tribe and designed to increase safety in that area. Tribal Chair Lloyd Mathiesen says, “The intersection is one of the worst in the county, with a lot of blind turns, and combined with the speed, doesn’t mix well.

They reached out to Caltrans about potentially developing a new intersection and the end result was a roundabout. Chicken Ranch has received the final needed permit from Caltrans so the construction can move forward.

It will take roughly five months to complete, and work should conclude in September. That includes getting all of the last pea gravel placed inside the roundabout and wrapping up the final shoulder work.

Mathiesen adds, “We’re going to do everything we can to keep the traffic disruptions as minimal as possible (during construction). We are going to work on one side of the road at a time so that we can keep the traffic moving the entire time. That is the goal, and the plan, and we’re hoping to be able to execute that.”

To further clarify, the plan during construction is that both lanes of traffic will be shifted to one side of the highway while the opposite side is being developed and, once that side is complete, both lanes will shift to the other side until the entire project is complete. This way, uninterrupted two-way traffic will continue throughout the project and the need for one-way traffic controls will be minimal.

In the meantime, work on the Tribe’s new resort project is also underway, visible from Highway 108, near the existing casino.

Initially, they were planning to construct the project in the next 5-8 years, but then the COVID shutdown came, and actually freed up time for the architect and tribe to fast-track the effort and move it forward in only a year and a half.

Mathiesen says, “We’ll be opening the doors early in the first quarter of 2024. And we’re anxious and excited at the same time. We’re going to be able to create another 250 to 300 jobs, but also still trying to find 250 to 300 people to work.”

The new casino and resort will feature nine floors, three restaurants, 200 hotel rooms, and “some other surprises,” as Mathiesen states. There are currently around 600 gaming machines at the existing casino, and the new resort will bump it up to around 1,000.

When asked, Mathiesen said the recent financial economic investment in the community totals nearly $450-million, when taking into account the resort, roundabout, water projects (such as a new wastewater treatment plant) and other ongoing efforts.