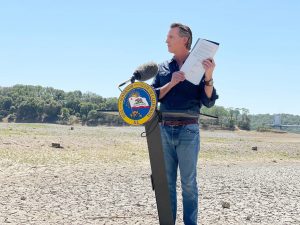 Sacramento, CA – A new proposal by Gov. Gavin Newsom would put millions in the hands of native tribes to preserve their ancestral lands.

Newsom on Friday proposed giving Native American tribes $100 million so they can purchase and preserve nearly one-third of California’s land and coastal waters by 2030. It was part of an executive order signed by Newsom in 2020 mandating the importance of reducing the effects of climate change in the state.

“Too often, California Native American tribal communities are overlooked and suffer many of the worst impacts of climate change,” said Governor Newsom. “The California way is not to hide from our past, but to embrace it with a commitment to build upon our values of inclusiveness and equity for everyone who calls this state home.”

The funding would not function like a traditional California grant program where the state oversees the money. Instead, tribes would decide where to spend the funds.

“We know that California Native peoples have always had interdependent relations with land, waters, everything that makes up the state of California,” Newsom said. “Unfortunately, we also know that the state has had a role in violently disrupting those relations.”

A growing Land Back movement to return Native American homelands to their descendants is fueling the proposal. Aside from buying land, tribes could also use the money for programs that address climate change and workforce development.

Overall tribal leaders in the state praised the plans but say a structure for distributing the money would have to be worked out. One major concern is how it would work in practice, especially in situations where tribes have competing claims on the same land. They worry that it would complicate decisions regarding purchasing the land.

These funds are just one piece of Newsom’s $286.4 billion budget proposal. The state Legislature would have to approve the spending before it could happen.