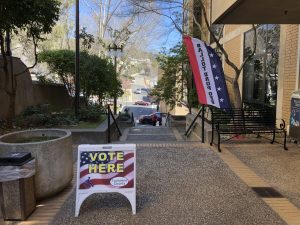 Update at 2:55 p.m.:  There will only be one candidate in the race for Tuolumne County Superintendent of Schools this June. Two candidates had filed papers by last Friday’s deadline for the Superintendent of Schools position, incumbent Cathy Parker and challenger Zachary Abernathy. There was a snag for Abernathy, as the position requires an administrative service credential, which he has been working with Tuolumne County Clerk and Auditor-Controller Debi Bautista regarding his eligibility. Bautista now tells Clarke Broadcasting, “Mr. Abernathy came into the elections office about a quarter to two and he has withdrawn his candidacy…So, he will not be on the June ballot and he is not a candidate.”

When asked about his reason for withdrawing, Bautista stated, “He’s going to make a public statement tomorrow and I think we’ll let him speak for himself.”

Further details on the June races can be viewed below.

Original post written by BJ Hansen at 7:57 a.m.: Sonora, CA — We now know who the candidates will be for Sonora City Council this June, but there remains uncertainty regarding the race for Tuolumne County Superintendent of Schools.

The filing deadline passed on Friday, but it was extended until late yesterday for races in which the incumbent is not running.

Both Colette Such and Jim Garaventa declined to run for re-election to the council. There were no last-minute additions yesterday, so the four candidates who will vie for the two seats are Suzanne Cruz, Darren Duez, Kurt Bryant and Andy Merrill.

We reported earlier that two prospective candidates filed papers last week needed to run for the Superintendent of Schools position, incumbent Cathy Parker and challenger Zachary Abernathy. The position requires an administrative service credential, and the election’s office, led by County Clerk and Auditor-Controller Debi Bautista, is still working with Abernathy to review his eligibility related to the requirement. The office has also been in contact with state officials to gain more clarification on the matter.

When a decision is made, Bautista indicated to Clarke Broadcasting that the County Counsel will release a corresponding opinion document regarding the issue.

Parker has served one term as Tuolumne County Superintendent of Schools. Abernathy is currently an Activities Director and teacher at Sonora High School.

We’ll pass along more information when it is released.

To read an earlier story about other races, click here.