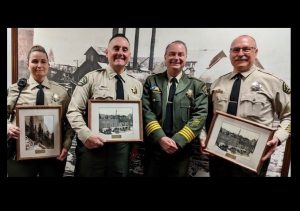 Sonora, CA — Three members of the Tuolumne County Sheriff’s Office were honored this week with county service awards for their 20-plus years of dedication to the community.

Special recognition was given at the board of supervisors meeting to Lt. Robert Nikiforuk, Sgt. Shaylene Graziose and Sgt. James Oliver.

Lt. Nikiforuk was recognized for 20 years of service. He started as a jail deputy in 2002 and transitioned to a patrol deputy in 2004. He has served various assignments, including Search and Rescue, SWAT, Tuolumne Narcotics Team, detective and administrative sergeant.

Sgt. Graziose was also recognized for 20 years of service. She started in 2002 as a jail deputy and was promoted to sergeant in 2008. She has also served 20 years as a US Navy Reserve while working with the sheriff’s office.

Sgt. Oliver has over 25 years of service. He started as a reserve deputy in 1994 and became a deputy sheriff in 2007. He has served as a range master, member of the SWAT Team, ALICE instructor, administrative sergeant, Search and Rescue sergeant and civil coroner sergeant.

The three were praised by the board and thanked for their commitment to the community.