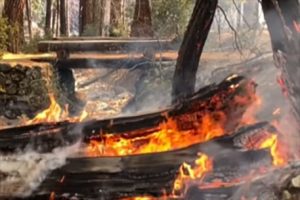 Yosemite, CA – Yosemite National Park has temporarily closed off a section of one trail during a prescribed burn for public safety.

Crews completed ignition of 55 acres in Yosemite Valley yesterday (March 14). To ensure safety during the project a portion of the Valley Loop Trail has been temporarily closed.

Additional burning is going on today with crews monitoring conditions and the project’s progress. Park fire officials remind, “Burning during this time of year, when conditions are just right, helps to create a healthier forest and lowers the risk of more dangerous fires in the future. Native plants benefit and invasive ones are more controlled.”

Smoke is visible throughout several locations in the park. Motorists can expect to drive through it in the active area when exiting Yosemite Valley. They are asked to slow down and watch for firefighters on the roadways.