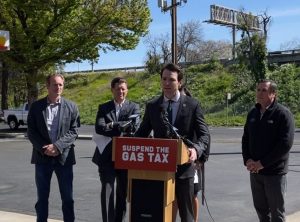 We reported earlier that Governor Gavin Newsom is proposing a gas rebate program, with details yet to be released.

Assemblyman Kiley argues, “We have within our grasp a lever that will bring meaningful, simple, relief (gas tax suspension). There is no need for some complicated new rebate program that offers a vague  promise of a check in the mail at some future date, in some amount, after in winds its way through the same bureaucracy that so spectacularly failed to deliver unemployment checks for the past two years.”

The lawmakers stated that they will initiate a vote on the floor of the Assembly so that every member can vote and state their opinions.

Kiley stated the suspension of the gas tax would amount to 51-cents per gallon.