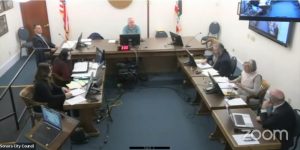 Sonora, CA — The Sonora City council members had a passionate debate about whether to disband or grant more time for the Social Equity Committee to complete its work of drafting a city resolution condemning racism.

At last night’s meeting, Mayor Matt Hawkins and Mayor Pro-Tem Mark Plummer both stated that they feel it is time to disband the committee. Plummer stated that the past draft resolutions have contained “Marxist language,” that is “divisive” and “a distraction.”  He also argued that it is more appropriate as a community group, as opposed to government-sanctioned. Meanwhile, councilmembers Colette Such and Ann Segerstrom were in support of continuing the committee. Such noted that it was important that the group at least have time to finish the resolution that has been in development for several months. Segerstrom stated that the “misinformation has been astonishing” about what the group is hoping to accomplish in welcoming people of all types to the community.

Councilmember Jim Garaventa proved to be the swing vote. He recently resigned from the committee, and in his resignation letter indicated that moving this discussion outside the government sphere could be beneficial.

However, he learned on Sunday that a pastor of a local church, which Garaventa identified as Cavalry Chapel, made comments to parishioners about the committee having special powers to give out fines, and also stated it is pushing critical race theory. Garaventa said the pastor encouraged people to reach out to him (Garaventa) directly and voice opposition. The pastor’s statements were also posted on social media. Garaventa argued, “The premise isn’t true, the committee doesn’t have special powers, and it is an advisory committee to the city council.”  Garaventa said the pastor’s statements “backfired,” and led him to feel the committee now needs more time to finish its work. Garaventa further stated that in recent years his girlfriend and her son have been victims of racism in the community, and have been called the “N-word,” unprovoked. Garaventa said racism locally has decreased since when he was young, but it is still around.

Garaventa moved to place a March 31st deadline for the committee to finish its draft resolution, and also agreed to personally rejoin the group, after earlier resigning. The resolution will then be discussed at the April 4 council meeting. A decision on the future of the committee, whether it will continue in the government form, or transition to a community group, will come after that time. Garaventa’s proposal was approved 3-2, with councilmembers Plummer and Hawkins in opposition.