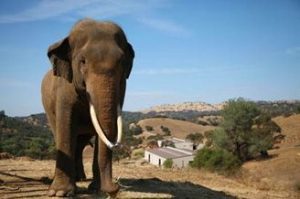 Sacramento, CA — On the move this week is a bill that aims to eliminate a problematic loophole, through which ivory sales continue to thrive, even though they are technically already illegal under current state law.

This week, Speaker Toni G. Atkins’ AB 96 passed 10-2 in the Assembly Water, Parks and Wildlife Committee. Enjoying broad bipartisan support, it is next scheduled to move on to the Assembly Committee on Appropriations. Current state law banning ivory sales exempts ivory products imported before January 1, 1977. The new bill eliminates the exemption. Under the jurisdiction of the Department of Fish and Wildlife, it specifically prohibits a person from purchasing, selling, offering for sale, possessing with intent to sell, or importing with intent to sell elephant ivory or rhinoceros horn, except as specified under very limited educational and scientific circumstances.

Ed Stewart, the president and co-founder of the San Andreas-based Performing Animal Welfare Society (PAWS), whose wild animal sanctuaries are home to several elephants, says he can’t imagine anyone voting against the measure. “I think it’s a long time coming, the way we are disrespecting elephants in the wild, a hundred a day have been poached. It is a really drastic situation. The ivory is going somewhere and everybody who is caught selling ivory says that it is ‘old’ ivory, ‘antique’ ivory, and it isn’t — so, I think to close it down is the next natural move. A very small amount of people profit from this and it’s not worth the price of extinction for elephants.”

Stewart says that, due to California’s dubious status as the second largest U.S. retailer of ivory, through the bill’s passage, the state could make a very big dent in the ivory trade. Even though public sentiment regarding ivory trafficking has become increasingly negative, active venues still openly promote their wares, he points out. “There’s a strip in San Francisco that has signs all over the place saying ‘ivory for sale’,” he comments, calling out one notable example. In promoting AB96, Atkins simply states, “California should not allow a loophole turn us into a haven for illegal ivory and rhino horn trade.”

According to Stewart, PAWS often hears from people with ivory who are in search of ways to ethically dispose of it and adds that PAWS is more than happy to make referrals to outlets that specialize in destroying these items.