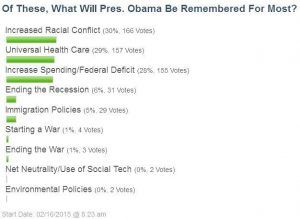 An informal poll this week asked what President Obama will be remembered for most. Increased racial conflict barely beat out universal health care and increasing spending/federal deficit.

President Obama issued statements regarding 17-year-old Trayvon Martin of Florida, killed in February 2012 and regarding issues in Ferguson, Missouri, over the shooting of 18-year-old Michael Brown by a police officer in August 2014. Issues of unrest were handled by the local governors.

Obamacare, or the Affordable Care Act, is not universal health care or a public system that includes all people, such as extending Medicare to all Americans. Obamacare’s individual mandate to buy health insurance allows uninsured individuals the choice not to “buy-in” but they pay a tax penalty. According to the Department of Health and Human Services (HHS) “Improving the quality and affordability of care for all Americans has always been a pillar of the Affordable Care Act, alongside expanding access to such care.”

The chronic gap between what the government spends and what it collects in revenues continues. Under current law, the nonpartisan Congressional Budget Office (CBO) projects the current year’s deficit will be $492 billion, and will fall to $469 billion next year. The CBO projects annual deficits will start to rise again in future years. Recently the Senate Passed a $1.1 Trillion Spending Bill but there is conflict over funding homeland security/immigration changes, another issue some might argue relates to increased racial conflict.

The other less popular opinions that perhaps deserve their own polls match with a National NBC News/Marist Poll taken this month. It concluded that Americans are divided over whether President Obama will be remembered more for ending the war with Iraq as promised when he ran for office (40 percent) or starting a new one with ISIS (44 percent).

The president announced Feb 11th he was asking Congress to vote to allow the use of U.S. military force against ISIS. His proposed authorization would last for three years and would have no geographical limitations.
It also calls for flexibility for limited ground operations by the U.S. military, but rules out a longstanding ground force. The resolution could formally authorize the already six-month-old U.S. military effort.