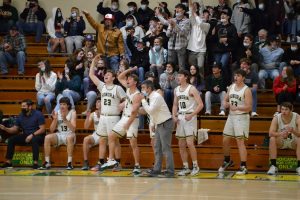 The Sonora Wildcats basketball team is nearing the end of a remarkable regular season. With a record of 24-2, the Cats are ranked number four in the state’s Division 4 rankings, and number one in the Sac-Joaquin Section. They are poised to defend a run of section championships that was interrupted last season not by an opponent, but by the pandemic.

It seems like an eternity since coach Lloyd Longeway last hoisted the section championship trophy at Golden One Arena in Sacramento back in February of 2020. The two years since have been filled with uncertainty and frustration. But while many high school basketball programs in California went dark last winter, Coach Longeway kept his group grinding under the banner of the Sonora Hoops AAU program. Last winter, around thirty boys ranging from 8th graders to experienced varsity players practiced together regularly on outdoor courts around the county. At one point, the county shut down outdoor practices too. But Longeway persisted and gave his group at least some facsimile of a season. Sonora Hoops, both varsity and JV, played in a short spring league in Ripon, and then ultimately the high school’s varsity program was able to resume for an abbreviated eight-game schedule in May. Only parents were allowed to attend. There were no playoffs. On one level, in comparison to the lofty heights of those recent championship seasons, it was anticlimactic. On another, it was a master class in making the most of a difficult situation. “Without access to a gym, having the guys continue to work on their game outdoors was huge for us,” said Longeway. “This year’s seniors really led the way. They just kept showing up. They were determined to get themselves ready.”

“Practicing outside is obviously not ideal,” said senior Callahan Hanson, who is the only player in the program to have played a significant role on that 2020 championship team. “It was hard on my joints. After practices on the pavement, I would often stand in an ice bucket on my deck. But for our team, it was character building. Some guys didn’t make it through that spring, but the ones that did have helped us be a highly competitive team this year.”

Sonora had no seniors on the roster for last May’s season, winning half of their eight games. Hanson, then a junior, averaged 22.5 points per game and was able to establish himself as one of the premier players in the region. “We had some growing pains,” Hanson recalled. ”But we practiced hard—finally in a gym—and went into the summer knowing that we had work to do for the next season.”

So even in the midst of the turmoil surrounding high school athletics during the pandemic, Longeway entered fall workouts having laid a solid foundation for his program. In addition to Hanson, lightning-quick senior point guard Ben White was playing great basketball. Senior wing Jacob Cassaretto emerged last season as an efficient scorer and versatile defender. Seniors Elijah Yee and Ethan Sturzenacker were ready for significant roles. Senior CJ Sherwin would provide valuable depth. Also claiming varsity spots were sophomores Ryan McDaniel and Ryder Foust. McDaniel had started as a freshman during the Covid shortened season. This group had one glaring weakness—a lack of size. Foust, at 6’3”, was the tallest player on the roster during fall practice and he had yet to play a varsity minute. Juniors Chance Pimentel (6’5”) and Roger Alderman (6’6”) were busy starring on the Wildcats playoff bound football team, and it was unclear if they would return to the hardwood at all.

As the basketball season’s first game approached, Sonora’s football team was bounced from the playoffs by Hilmar. The following Monday, Pimentel and Alderman reported for basketball practice, along with fellow football players Jared Franklin and Tyler Sells. Senior Kade Clifton joined shortly after. Alderman and Pimentel would supply the physical presence the roster previously lacked.

Four days later, the Wildcats opened the season at Golden Valley in Merced with a dominant 77-46 victory. The Wildcats reeled off ten straight wins to open the season by an average margin of 21 points. Along the way, they collected the championship at the 65th annual Joe Nava Delta King Classic in Stockton, where Ben White was named to the All-Tournament team and Callahan Hanson was the MVP. They finally met their match versus a strong Manteca team in the semifinals of the Mark Gallo Invitational at Central Catholic High in Modesto. Since that loss, they’ve won 14 of 15 heading into Friday night’s home game against Summerville.

Longeway’s teams have a reputation for being disciplined, tough-minded, and efficient. They play hard and they play together. Now in his fifth season (including last year’s truncated one) as Sonora’s varsity coach, he enters Friday’s game with a stellar career record of 107-18. As mentioned, his Wildcats are ranked fourth in the state in Division 4, and first among Division 4 teams in the Sac-Joaquin section. In the 209 area code, they trail only Division 1 powerhouses Modesto Christian and Lincoln, two teams with state championship aspirations in California’s highest division. These are lofty heights for a small high school from the foothills.

While the sharpshooting Hanson leads the Wildcats with 19.3 points per game, point guard Ben White has also proved to be indispensable. White is the team’s emotional leader, pushing the pace with a relentless, attacking style of play. He’s second on the team in scoring at 10.5 points per game, while leading the Wildcats in assists, steals and floor burns.

The silky-smooth Cassaretto is third on the team in scoring, rebounding and assists per game despite losing significant time to a nagging hip injury. Pimentel, the 6’5” junior, can play inside or out, and his versatility creates matchup problems for opponents. Alderman, at 6’6” and 260 pounds, possesses remarkable athleticism for his size. (He’ll play Division 1 college football after graduating from Sonora.) Alderman leads the team in rebounds per game, blocks, field goal percentage and bone-jarring screens while averaging seven points and five rebounds per game. Senior Elijah Yee has emerged as a valuable three point threat, averaging 39 percent from behind the arc. Senior Ethan Sturzenacker has provided key scoring off the bench, including a couple of crucial threes on the road against rival Summerville. Sophomore Ryan McDaniel is a cat-quick defensive stopper who has also provided timely three point shooting. Sophomore Ryder Foust is a versatile, athletic defender with a sweet left-handed shooting stroke. Junior Jared Franklin is yet another quality wing player capable of scoring double figures on a given night. CJ Sherwin, Tyler Sells, and Kade Clifton provide valuable depth. Nine different players have started games over the course of the season. Coach Longeway’s biggest challenge has been finding playing time for so many deserving players. In recent games, Longeway has often played all 13 players in the first half. As problems go, it’s not a bad one to have.

“These guys have been a great group to coach,” says Longeway. “They care about each other and really work hard to try to do the things we teach. We are taking it one game at a time, and looking forward to the challenges of playoff basketball.”

Hanson reflected on the journey that began last winter and is culminating with this remarkable run. “We got better as a team last summer, then added to that with fall conditioning. I think it was those periods of time that saw the most growth for us. Times when things aren’t necessarily fun, when games are few and far between. You have to find motivation within yourself in order to improve, and many of the players on our team were able to do that.”

The Wildcats are currently tied with Calaveras atop the Mother Lode League standings. The rivals split their two meetings, each winning on its home floor by five points. Cross county rival Summerville is the lone remaining regular season game this Friday, February 11 at 7:30. (Attendance is limited to 500, so come out early! The varsity girls play at 6:00.)

The Sac-Joaquin section playoffs begin next week, and in addition to a possible third meeting with Calaveras, old foe Liberty Ranch is looming large. The Wildcats had to go through Liberty Ranch enroute to both recent section championships. The Hawks have won 17 of their last 18, with the only loss a tight one at Sonora in early January. It won’t be easy, but this Sonora team has a chance not only to win another league and section title, but to make a legitimate run at a Division 4 state championship. No team from the Mother Lode League has ever won state. Sonora is likely to host a minimum of two playoff games, so stay tuned. With local media coverage for high school sports sometimes difficult to find, there are two additional ways to follow the Wildcats. Check out the team’s Facebook page (Sonora Wildcats Basketball) for results, photos, and video highlights not only for the varsity, but for the JV and freshman teams. For the schedule, box scores and season stats, check out MaxPreps (Link: https://www.maxpreps.com/high-schools/sonora-wildcats-(sonora,ca)/basketball/schedule.htm