Displeasure Voiced About Tuolumne County Having Worst Roads In California 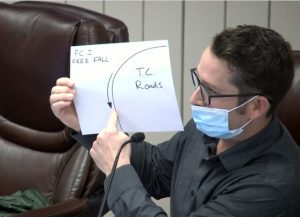 Sonora, CA — A new state report ranked Tuolumne County’s roads as the worst in the State of California.

Each county receives a Pavement Condition Index (PCI) score between 0-100, and Tuolumne County is currently at the very bottom with a score of 28. Click here to view the report. Tuolumne County Public Works estimates that it would cost around $439-million over the next 10 years to be in the desired place.

It was discussed during a presentation on the state of the roads during today’s board of supervisors meeting. The board agreed collectively that they would like to lobby the Governor’s office, and other state leaders, about the need for more revenue, and the competitive disadvantage rural counties face. The county will look into hosting a special meeting in Sacramento so that all five members of the board can attend under Brown Act laws.

District Two Supervisor Ryan Campbell indicated the county is at a competitive disadvantage in the state’s funding formula because of the lower population numbers but a higher number of road miles. He argued that the state also needs to allow local public works departments the ability to do more of the work in-house rather than needing to request bids after certain dollar thresholds.

District Four Supervisor Kathleen Haff said the formula for SB1, which allocates road dollars, “is ridiculous.” She adds that 60-percent goes to the state and only 40-percent to counties, with strings attached and requirements. “This has to stop and we need to get a bigger percentage,” she argued.

Supervisors David Goldemberg and Jaron Brandon were also critical. Brandon noted that he desires to see a long-term plan developed to address local road improvements. He supports efforts to lobby the state for changes but also indicated the county cannot rely on that to happen, so the county should investigate local solutions.

More discussion on potential efforts to lobby the state will be discussed at future meetings.