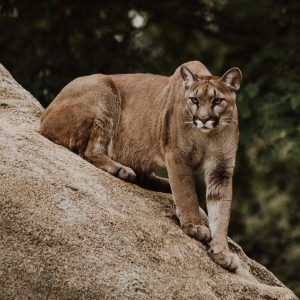 Tuolumne, CA – While out on a morning run today along the Westside Trail off Buchannan Road, a jogger suddenly realized he was not alone.

Bobby Richardson of Tuolumne recounts his face-to-face encounter around 10:15 a.m. about two miles down the trail with not just one, but two mountain lions.

“I saw two of what I thought were dogs running towards me except I didn’t see an owner, which concerned me. Then I noticed that their paws were a little bigger than a dog and I realized it was two lions jogging down the trail towards me.”

Richardson added that he actually had spotted them a couple of seconds before they saw him. He continued, “They both stopped and I shouted at them to let them know I was a human there. They turned around and ran back about 20 to 30 yards. They stopped and looked back at me and cut off-trail running.

Not exactly a shock, but definitely a surprise, says Richardson, because you always know they could be there. However, he says what was unique was how close they were to the beginning of the trail, about 2 miles in from the start.

“It wasn’t as frightening as you might expect. I don’t feel like I was stalked. Honestly, I think they were just playing with each other, having fun, and were startled by me.” Laughing he relayed, “Obviously, once I saw them, I made sure to grab a big stick and a couple of rocks. I walked carefully for the next couple of miles with my attention up very high.”

Richardson says the cougars were probably siblings and each ranging in size between 60 and 80 pounds.  He says he called Clarke Broadcasting because he wanted to alert the public. When asked if he was able to take any pictures of the cats, Richardson laughed, “No, pictures would have been nice, but that wasn’t my immediate concern.”

Click here for tips from wildlife officials on what to do when a mountain lion is spotted.