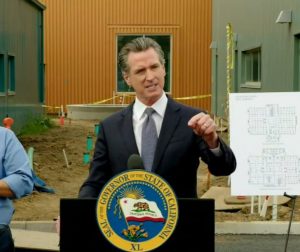 Los Angeles, CA — Some Democratic politicians are being criticized for pushing mask requirements forward and then being photographed at an NFL game over the weekend in LA, mask-less, with former NBA star Magic Johnson.

One of those pictured was Governor Gavin Newsom. He was asked about it during a press conference this morning, and responded, “Magic was generous enough to ask me for a photograph, and in my left hand was the mask, and we took a photo. The rest of the time I wore it, as we all should.”

Newsom claims he only took the face-covering off when drinking water and posing for the photo.

Others who were pictured mask-less with the basketball star were San Francisco Mayor London Breed and Los Angeles Mayor Eric Garcetti. The photos were posted on Johnson’s Twitter account which can be found here.

The Republican National Committee has put out a statement this morning reading, “The utter lack of respect that Democrats have for California citizens is appalling. Governor Newsom extended emergency COVID protocols through March 2022, yet as he closes schools or requires children to wear masks all day, he walks around at a mega event snapping pictures with his favorite liberal mayors.”

The LA Public Health Department required masks inside the stadium for Sunday’s game between the Rams and the 49ers.

Newsom was also publicly criticized for attending a large dinner at a restaurant in Napa in November of 2020 at a time when gatherings were being frowned upon by officials.