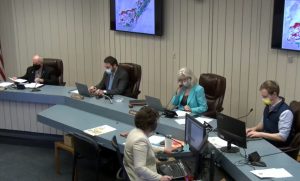 Sonora, CA — The State of California’s Board of Forestry and Fire Protection continues work on new regulations that would notably impact development in the more rural areas of the state.

“The State Minimum Fire Safe Regulations” are designed to do things like establish standards for fuel breaks, preserve undeveloped ridgelines, create new lot setback requirements, improve roads, and fix areas of inconsistencies or conflicts. However, county officials have raised concerns that there are various aspects, and broad stroke fixes, that would make new development projects nearly impossible, or cost-prohibitive.

Tuolumne County leaders have been voicing concerns over the past year about the proposed regulations. The state is nearing the completion of the review process. It was noted at today’s Board of Supervisors meeting that some of the state’s earlier proposals have now been “walked back.” For example, there is clarity on the types of projects that could trigger the new regulations. For example, simply pulling a building permit to reroof or do plumbing work on an existing house will not require improvements on things like private roads. Instead, the new rules are triggered by increased land use density or intensity.

All five of the supervisors voiced concerns about the proposed new state rules, especially at a time when new housing is desired statewide. District Two Supervisor Ryan Campbell referred to it as an “unfunded mandate.” District One Supervisor David Goldemberg, a former firefighter, said he recognizes some of the concerns the state is trying to address, but “they have clearly fallen short.”

To read more information about the issue, and the letter of concern approved by the board today, click here.