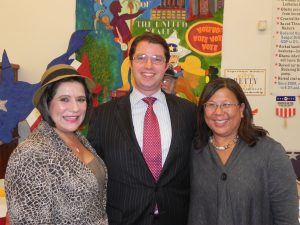 We reported two weeks ago that Republican Controller candidate Ashley Swearengin brought her message to an event in Sonora. Last night, her Democratic challenger, Betty Yee, made a campaign appearance as well.

“California is on the verge of an economic recovery, and we want to be sure that, as we do recover, that the state’s fiscal house remains in order,” says Yee. “I’m going to make sure that there is good oversight of state finances, that we’re paying our bills, and that we’re not going to incur any additional significant liabilities, so that we can have a full recovery, in terms of budget stability.”

Yee, a member of the California Board of Equalization, was a guest of Tuolumne County Democrats at the party’s headquarters on South Washington Street. The Controller seat is wide open this year, as outgoing Controller John Chiang is running for California Treasurer.

Also on hand last night was Senate candidate Paulina Miranda, of Fresno, who is running against incumbent Republican Tom Berryhill. Miranda said water is the main issue she’s focusing on this the election. She said, “We are just using four percent of the water in the world, and the ocean has 96% of the water. We are receiving a lot of raining water on the land in the Central Valley. We are letting this water come back to the ocean, so we need to have underground reservoirs, and also more dams, to maintain the raining water in California.”

The Sonora campaign event also featured Board of Equalization Candidate Chris Parker, who is running against George Runner. He said, “I am the only active tax professional running for California’s tax board. I’m also an educator, and teach business and employment law to aspiring entrepreneurs. I want to use that experience to provide educational tools and resources to people that want to start a small business in California.”

The election is coming up three weeks from today.