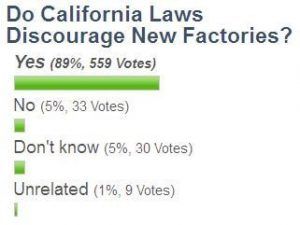 Sacramento, CA — Since a company headquartered in California chose to build a large factory in Nevada it has ignited more debate on state taxes and environmental regulations. Tesla Motors, headquartered in Palo Alto, with manufacturing plants in Fremont and Lathrop announced last week that Nevada is their first choice to quickly build a $5-billion car battery factory.

A myMotherLode informal poll asked “Do California Laws Discourage New Factories?” 89 percent voted yes. The poll ran from September 5th to the 8th with 631 votes. Locally legal challenges related to large projects trying to declare a negative environmental impact have been challenged and delayed. A local issue related to Walmart expanding made it before the California Supreme Court. In August the Supreme Court ruled in favor of Tuolumne Jobs and Small Business Alliance and held that direct adoption by a city or county of a land use initiative ordinance does not require any CEQA review. The details are in the news story “Walmart Wins Lawsuit”

The loss of the 10 million square foot gigafactory that seeks to employ 6,500 workers by 2020 and open in 2017 was mentioned in the debate between Gov. Jerry Brown and challenger Neel Kashkari. Kashkari said, “I don’t think Governor Brown did nearly enough for Tesla or any number of businesses.”

California State Sen. Ted Gaines released a statement saying, “It’s a clear indictment of our business climate that Nevada is pulling this huge investment away from its natural home. I’m not sure there could be a stronger signal to legislators about how hard they have made it to operate here.” He added, “I challenge my colleagues to join me in a bi-partisan effort to ensure that we are the number-one destination for the next gigafactory.” At the end of July, Stockton was reported as one of the cities considered for the Tesla factory.

The Nevada Legislature is meeting today to discuss $1.25 billion in incentives for Tesla proposed by Nevada’s Governor. Most of the incentives are sales and property tax abatements over the next 20 years. The gigafactory calls for 500 acres for the factory, and wind and solar power generation. Nevada has no individual or corporate income tax and the only operating lithium mine in the U.S., a key raw material for the batteries it will manufacture.

According to California’s website the state does encourage manufacturing. The Economic Development Initiative (AB 93 and SB 90) passed in 2013, includes a sales and use tax exemption for the purchase of manufacturing, biotech and R&D equipment. The “California Competes” tax credit will provide $180 million in incentives over the next 12 months to companies that want to expand or relocate to California. Within another bill, AB 2389 approved in July 2014, battery manufacturers can be given a break on property taxes. The main goal of the bill was to provide $420-million in tax credits over 15 years if aerospace giant Lockheed Martin builds stealth bombers in California.

In May 2014 Southern California was awarded National Manufacturing Community Designation by U.S. Commerce Secretary Pritzker. The award provides a dedicated federal liaison at each of eleven agencies in the US Department of Commerce and use of up to $1.3 billion in federal economic development assistance.