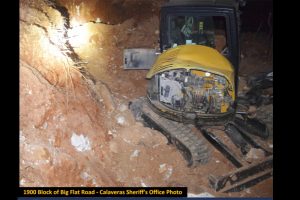 Murphys, CA – A search warrant at a property in Murphys turned up stolen items including an excavator.

The Calaveras County Sheriff’s Office Detective Unit served a search warrant on Wednesday (Dec. 1) in the 1900 block of Big Flat Road in Murphys. Sheriff’s spokesperson Lt. Greg Stark reports obtaining the warrant was a result of “an in-depth investigation” of a “CAT” excavator stolen out of Nevada.  He elaborated those detectives learned the earthmoving equipment was at the property and were able to show proof.

That was not all that was found during the raid on the property, detectives also seized two handguns and 10 grams of methamphetamine, as pictured in the image box photos. James Martin St. Louis, 38, of Douglas Flat, and David Lee Copeland, 38, of Vallecito, were arrested without incident for several felony theft and drug charges. Both were placed on a $150,000 bail. Lt. Stark noted that no further information was being released regarding the theft as this remains an ongoing investigation.