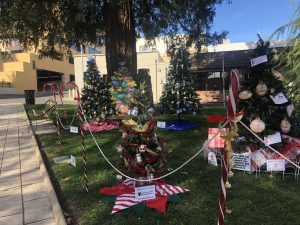 Sonora, CA – Christmas Town Sonora has a nice ring to it and organizers are hoping to make the downtown area a new holiday destination.

“We want to put heads in beds. Christmas Towns are all across our country and they stimulate local economies because people come from all over to go to Christmas Towns,” explained Katie Dunn president of the Sonora Chamber of Commerce.

Dunn says the idea came about on a Zoom meeting and in January a committee was formed. “Our goal is to become a nationally recognized Christmas Town. We presented our big idea to the Sonora Area Foundation’s Innovation Challenge and were awarded $10K. So, that was our seed money.”

Courthouse Park has been turned into Christmas Tree Lane. Over 30 non-profit groups have already been decorating trees, each with its own unique holiday flare, as can be seen in the image box pictures. For a trip to the North Pole, one only needs to head to Linoberg Road, which will have a special guest, Mrs. Claus, entertaining the children at two special events.

Noting that all types of businesses can benefit, Dunn added, “It’s not just about Sonora, it is about Tuolumne County because we are going to be driving traffic to the county and everyone can benefit. It’s going to be a building block because we can link with other communities and events in the county, like the Polar Express in Jamestown.”

The committee is working closely with businesses and the city to make sure there are plenty of holiday lights and decorations lining Washington Street. Not an easy task for the city as most of its holiday decorations, including wreaths for the light poles, were destroyed by the Washington Fire flames that broke out in August, as detailed here.

“We weren’t able to get everything that we would normally have in downtown, stated City Community Development Director Rachelle Kellogg, “but we are working really hard to get some things down here as far as our normal decorations on the poles.”

Those are banners for the light poles on Washington Street. City staff was told they would arrive in time for the Christmas Parade, but they came in five days after the parade due to supply chain issues.  A photo shows they went up on Wednesday (Dec. 1).

There are plenty of activities planned throughout the month. For a list click here. A smiling Dunn says this is just the beginning, explaining, “We’ve been aggressively fundraising. This is just year one had we have big plans for year two and the sky is the limit. Next year, for our second yea,r our goal is to put a synthetic ice rink in Coffill Park and make it a winter wonderland.”