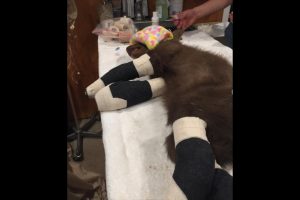 Sonora, CA – After going from being hailed on social media for rescuing a little bear cub with severely burned paws and then being villainized for his escape, a South Lake Tahoe wildlife center appears to have come full circle to a happy ending.

The cub was named “Tamarack” after the blaze that scorched more than 100 miles forced residents from their homes gained national attention with his plight and escape, by tunneling under an electrical fence, detailed here. Lake Tahoe Wildlife Care center officials noted that it was the “first escape in the 45-year-history of the facility.” This week, private donors, the Bentley Foundation and MH Buckeye, pledged to match $500,000 in contributions for a $1 million expansion at the rescue.

Repairs have been underway at the center since the California Department of Fish and Wildlife (CDFW) declared in October that it had to make improvements to its enclosures. The slow repairs have been attributed to supply-chain challenges, according to center officials. While state officials have allowed the center to continue rescuing smaller animals, including seven rehabilitated coyote pups that were recently released, it has been prohibited from accepting big game, like bears, since that order. Once the work is completed, CDFW will conduct a site inspection and evaluate whether to reinstate the center’s ability to temporarily house and care for larger injured animals. With this infusion of cash, center officials advise that the center should be fully operational by next month.

The new expansion to the facility will include a hospital with two large recovery rooms, surgery and X-ray areas, individual care buildings for different species, and a small dormitory for staff providing round-the-clock care. The rescue was only $180,000 short of the $1.05 million needed to begin building the first animal hospital in the Lake Tahoe area. Construction is slated to begin in the spring and finish by the end of 2022.

As updated here in October, center officials believed Tamarack to be safe after he was spotted in a tree for a second time. They added that after his escape staff never gave up and a lot of time and money was spent trying to find him. With that sighting, he is believed to be “out there now in the wild, living the bear’s life.”