Cub Burnt In Tamarack Fire Believed To Be Safe 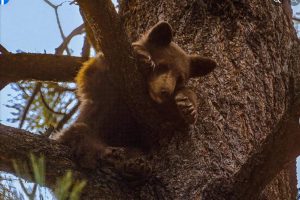 Sonora, CA – The bear cub “Tamarack” named after the fire that burnt its paws is believed to be safe and living in the Lake Tahoe area.

The bear cub received national attention when it was rescued from the fire in July and subsequently escaped from the Lake Tahoe Wildlife Care refuge where it was recovering, as reported here in August. A little later that same month, the hurt cub was found with bandages still on its paws clinging to a tree, as reported here.

Wildlife center officials gave an update on the fire cub, detailing that in mid-August they and state wildlife officials responded to a reported location of a small bear. Once on scene, they found a bear in a tree with no bandages. However, they detailed that it had a dark marking on its head, which resembled the Tamarack fire bear, and the cub was roughly the right size. Watching the bear from a distance while it climbed 30 feet higher into the tree, they noted that it was behaving like a wild and healthy bear should.

In a written statement wildlife center officials disclosed, “The decision was made not to disturb this bear and leave it in the wild. While we cannot be certain this was the escaped bear, staff feels strongly that it was him and are no longer asking the community to be on the lookout for the bear.”

The Tamarack Fire ignited on July 4th in Alpine County. It burned 68,637 acres, destroyed 25 structures, and damaged 7. Thousands were evacuated from their homes including in the South Lake Tahoe area. The blaze is 84% contained.