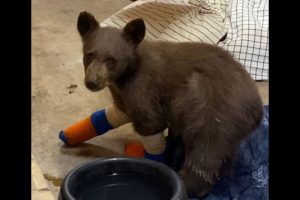 Sonora, CA –  The bear cub “Tamarack” named after the same-named fire burning in Alpine County has escaped from the Tahoe rescue center where it was recovering.

An evacuated homeowner found the emaciated bear with badly burned paws in their backyard, as reported here last week. Officials at the Lake Tahoe Wildlife Care center in South Lake Tahoe are asking for the public’s help to recapture the 6-month-old black bear. Tamarack managed to tunnel under an electric fence on Tuesday, according to center officials. They disclosed, “He is not in imminent danger and is not a threat, but we need to locate him as soon as possible.”

Wildlife center officials main concern is that the 25-pound cub will be more active in the evening and nighttime hours and could be hit by a vehicle. They are also concerned that dogs could attack the cub. Although most likely he climbed a tree or is hiding in a small space.

The public is cautioned to “NOT approach him,” as he fears humans, and while watching him call a hotline that has been set up at the center (530-577-2273).

The California Department of Fish and Wildlife and local law enforcement were assisting in the search. In asking for the public’s assistance, center officials shared, “We need your help, hearts and eyes to locate him quickly so he can be returned to get the medical care he needs. Thank you!”