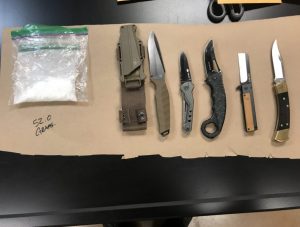 Copperopolis, CA — An Oakdale man was arrested after allegedly assaulting a Copperopolis resident and holding a knife to the victim’s throat.

The Calaveras County Sheriff’s Office reports that the incident occurred in the 3000 block of Snowbird Court. After a call reporting the crime came into dispatch, deputies responded to investigate and saw the suspect, 43-year-old Kenneth Donald Carnes, walking out of the victim’s garage. They ordered him to stop, but he took off running into the victim’s home. More deputies responded, and they searched the house, but could not locate him.

A concerned neighbor later walked over and told deputies their home was left unlocked when they left earlier and feared that Carnes may have gone inside. Deputies searched the other home and found him hiding in a closet. Carnes was arrested in possession of 50 grams of methamphetamine and five knives.

The charges filed against him include assault with a deadly weapon, two counts of residential burglary, domestic violence, possession of drugs for sale, transporting illegal drugs, resisting arrest and stalking.

We reported earlier that Carnes was arrested in 2018 after trying to flee officers during a traffic stop in Angels Camp. Two weeks later, in 2018, following a burglary, he led law enforcement on a chase through Calaveras, Tuolumne and Stanislaus counties before his eventual arrest.