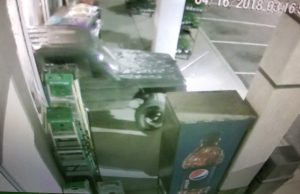 Keystone, CA – Two burglary suspects are behind bars after burglarizing a Calaveras County hardware store and then fleeing from CHP officers in neighboring counties.

Calaveras Sheriff’s detectives report that just after 3 a.m. Monday the two men used a Jeep Cherokee with no license plates to smash into the glass doors at the Young’s Ace Hardware store on Spangler Lane in Copperopolis. Stealing various Stihl products including chain saws, rototiller and a cement saw, the suspects fled in the black vehicle. A description of the Jeep along with details of the crime was posted to neighboring counties.

A short time later in Tuolumne County, CHP officers spotted the vehicle speeding and heading westbound on Highway 120/108 west of O’Byrnes Ferry Road. Sonora unit CHP spokesperson Faustino Pulido relays that the officers chased the Jeep over several county roads until it went off the roadway on Rock River Road in the Keystone area, near the Stanislaus County line and both suspects jumped out and ran. Stolen power tools and other lawn equipment from the store were discovered in the Jeep. A search ensued but neither suspect was found.

Around 7:15 the next morning, a nearby home owner called the Stanislaus County Sheriff’s Office to report he was holding a man at gunpoint that he discovered hiding in his garage.  Subsequently, the trespasser, 39-year-old Kenneth Donald Carnes of Sonora, was determined to be a passenger in the Jeep. Nearly an hour later, deputies also found the driver of the Jeep, 31-year-old Matthew Tobias Ayers of Oakdale walking on Willms Road south of Highway 120 in the Knights Ferry area. Carnes and Ayers face burglary, possession of stolen property and evading officers charges.

Of note, Carnes was arrested earlier this month for eluding Calaveras County Sheriff’s Deputies after a vehicle he was riding in was pulled over in Angels Camp, as reported here. He took off running but was captured after a K9 unit sniffed him out of his hiding place under a nearby fire truck.