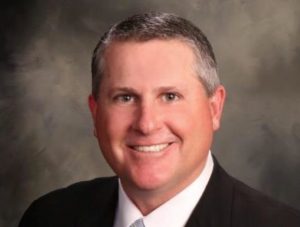 Oakdale, CA — Regionally based Oak Valley Community Bank has promoted Rick McCarty as the new President and Chief Operating Officer, effective the first of the year.

McCarty has been with Oak Valley for 22 years and joined back when there were only three branches and $150-million in total assets. The Oakdale-based operation now has 17 branches, including two in Sonora, and over $1-billion in total assets. We reported in 2015 about its merger/acquisition agreement with the former Mother Lode Bank.

Oak Valley Community Bank President and CEO Chris Courtney says, “Rick has been an integral part of the growth and prosperity of the bank. His oversight of the bank’s mission-critical functions and the instrumental role he plays within the management team have been key drivers of our success.”

Continuing, “This promotion signals the influence he has had on the company through the years and illustrates the continued execution of our succession planning initiatives.”

McCarty adds, “This transition will be seamless because we have a shared vision which keeps us aligned and able to connect the performance of core competencies with the achievement of long-term strategic goals.”

Oak Valley Community bank first opened its doors in May of 1991.