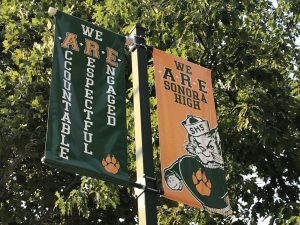 Sonora, CA–Clarke Broadcasting reached out to the Sonora Police Department (SPD) for more details on a physical altercation that took place between a teacher and a female student on October 26th just after 2 p.m. SPD spokesperson Thomas Brickley confirmed the incident, stating that it took place on Sonora High campus and was over a mask. Brickley detailed “The teacher reminded the student to wear a mask.”

The student then pushed the teacher, who fell to the ground and suffered an injury. Brickley states that due to HIPAA Regulations he could not elaborate on the nature of the teacher’s injuries. Police were called to the school and after investigating the incident, an arrest was made of the student on a felony charge of student battery on a school employee with injuries.

Clarke Broadcasting reached out to school officials but they have not as of yet responded about this incident.

Brickley did not know if the juvenile was still in custody.