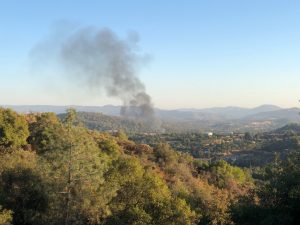 Plume of smoke coming from fiery crash on HWY 108

Sonora, CA – We now know the identity of the person that perished in a fiery five-vehicle pile-up on Highway 108 that shut down the roadway.

The CHP has identified the victim as 60-year-old Marcial Sanchez of Modesto. They disclosed that the delay in identifying the deceased was due to the condition of the body. The crash happened on Saturday, October 16th after 5 p.m. on Highway 108 west of Sanguinetti Loop where the roadway merges into one lane, as initially reported here. It involved five vehicles, two that hit head-on and another two that caught fire.

The CHP reported Sanchez, in a Toyota pickup traveling eastbound, that tried to pass the vehicle ahead of him on the right shoulder, sparking the chain-reaction crash, earlier detailed here. After being hit by a GMC Suburban, Sanchez’s pickup burst into flames, trapping him inside and he was pronounced dead at the scene. Luckily, those in the Suburban were able to get out of that vehicle before it also caught on fire.

Miraculously, the other individuals involved had just minor injuries or none. The entire roadway was blocked for three hours while officers investigated the crash and tow crews removed the debris and wreckage. It will remain a mystery as to whether alcohol or drugs played a role in this collision as the CHP noted that also could not be determined due to the condition of the deceased.