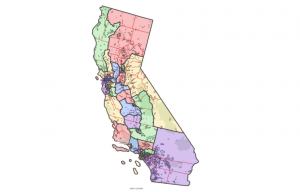 Sonora, CA — The California Citizen’s Redistricting Commission continues to work toward creating a proposed redistricting map that must be released ahead of November 15.

It will redraw the lines for Congressional, state Senate and Assembly seats.

The commission has been updating its proposal and releasing what they refer to as “visualizations” ahead of the November 15 date. Over the weekend, the commission released its first proposed visualization that would have expanded House Minority Leader Kevin McCarthy’s district from Bakersfield up through Tuolumne County.

However, a second, revised, visualization was just now released that puts Tuolumne and Mariposa counties back into McClintock’s district.  He would also continue to represent nearby counties like Calaveras and Amador. The commission has been receiving input from state residents and will continue to review comments and revise the plan ahead of November 15. At that point, more public comment will be received, and a final map will be adopted in late December. The boundaries will take effect in 2022. The maps are redrawn every 10 years.