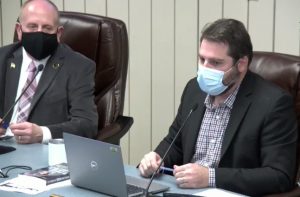 Sonora, CA — A proposed new ordinance creating a business license program in Tuolumne County would have made those who do not enroll susceptible to a misdemeanor.

The board passed the first reading of the ordinance to create a licensing program at a meeting last month and was scheduled to approve the final reading this morning. It called for a $32 annual fee for businesses in the unincorporated portions of the county (the City of Sonora already has a licensing program).

However, supervisors Jaron Brandon and Kathleen Haff raised concerns today that the wording states that violators could face a misdemeanor offense. There was consensus among the board that a simple infraction would be a better method than a misdemeanor, but if a change is made, it has to go back to square one of the public hearing process and delay the January 1st implementation. Board chair Ryan Campbell questioned county legal counsel about other current ordinances that have misdemeanors attached to them, for example, people building things like an unauthorized deck. Counsel confirmed that no one has actually been prosecuted for building an unauthorized deck, despite the practice being legally susceptible to a misdemeanor.

Sheriff Bill Pooley also spoke about the issue noting he is not taking a position on whether to pass the business license program or not, but argued that there are benefits to having a misdemeanor attached to it. He said he has witnessed scammers going to homes claiming to sell something, but in reality, they are scoping things out for a potential burglary. Pooley says if they receive calls about this type of suspicious activity, officials can tell them to go and get a business license, and if not, they could be cited with a misdemeanor.

Supervisors Campbell and David Goldemberg proposed to pass the final reading of the ordinance as written. Supervisor Anaiah Kirk has been against the overall program because it is mandatory and not optional. Haff and Brandon joined him this time in voting against it (2-3).

After the denial, Supervisor Brandon proposed creating an ad hoc committee to look at this issue, and any other related concerns that the business community may have about the program. The other supervisors opposed that idea because it could delay the implementation of the program by an extended period.

Three of the supervisors, Campbell, Haff and Goldemberg, then voted in favor of bringing back the resolution for a first reading at a future meeting, simply changing the potential penalty from a misdemeanor to infraction, so the legal review process can start as soon as possible. Supervisors Kirk and Brandon voted in opposition.