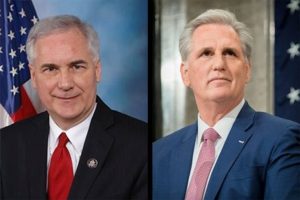 That is how things fall under the latest proposed map put out by the California Citizen’s Redistricting Commission. The non-partisan group is tasked with redrawing Congressional, Assembly and Senate boundaries every 10 years.

Meanwhile, the area currently represented by Republican Minority leader Kevin McCarthy would stretch from the south near Bakersfield up through Tulare, Fresno, Madera, Mariposa and Tuolumne.

There would be little change in the Mother Lode’s Assembly District, as Calaveras and Tuolumne would remain together in the region currently represented by Republican Frank Bigelow.

Meetings and public input will be gathered over the coming months ahead of the commission releasing a final draft in late December. The boundaries are still subject to change. The new boundaries would take effect in 2022.

To view a virtual map of the districts, both current and proposed, click here.